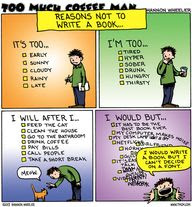 I've got a lot more than that.

It's the perfect way to get a tax deduction and support free speech for funny books---join the Comic Book Legal Defense Fund on the last day of the year! http://cbldf.myshopify.com/products/the-comic-book-legal-defense-fund
0 comments 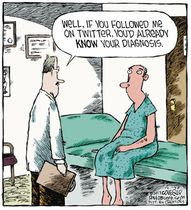 When tweets and HIPAA collide.

Spent the last 48 hours devouring all of Locke & Key by Joe "NOS4A2" Hill and Gabriel Rodriguez. Utterly amazing. I haven't been that enthralled by a comic in a decade.
0 comments

Xmas -- it's all about learning the value of cash money. This is actually a good offensive idea.

Effing sad. I've read two of his books, loved them, and even liked the movie based on It's Kind of a Funny Story. Sorry to hear this. 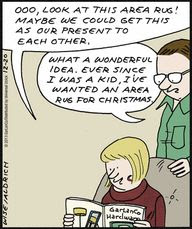 It's true, being a grown up rocks!

This is exactly how I picture it going.

It's the meme sweeping the nation! I could only come up with 9, but I have a memory like a sieve. Don't post your own list--tell me why mine is awesome and/or stupid. BOOKS THAT HAVE STAYED WITH ME: 1. SLAUGHTERHOUSE FIVE—the greatest book ever written. This is the only high-brow book on my list. 2. EIGHT BLACK HORSES – Ed McBain was, for years, my favorite novelist. I lived for that day each May when a new 87th Precinct Novel came out, and they were coming out long before I was alive. I've read them all and there's something about this one, where the (yes, actual) criminal mastermind called The Deaf Man tried to blow up the squad and [SPOILER!] it was foiled by the biggest idiot in the rotation that I just love. 3. WATCHMEN—If you didn't read it in 1987 as it came out, you missed out on the edge-of-your-seat waiting. (Tho I admit, I believe the ending of the movie is more clever than the giant squid—but I wish I owned the original artwork of the double-page spread of the squid "attack".) 4. THE SHINING – I didn't read it until I was in my 20s, working in NYC. I remember walking through mid-town and for some reason I was near Black Rock (CBS HQ) and I just stopped, pulled out the book, and had to sit and read it for a long while. (I'll also plug Stephen King's ON WRITING here—it's one of the few books I've bought multiples of, because people steal my copy. Great book for his fans, and all writers.) 5. WINTER PREY – Ed McBain passed away so now I live for the yearly releases by author John Sandford, who writes two series (two books a year!) about cops in Minnesota with a lot of character crossovers. For some reason this particular Lucas Davenport book sticks in my mind, probably because Lucas got shot in the throat while chasing people on a snowmobile. (I also really love Michael Connelly books, but Sandford is the crack in the pipe.) 6. THE AMAZING ADVENTURES OF KAVALIER & KLAY – Michael Chabon is a genius, and I think he captured the early days of comic-books about as perfectly as could be done without being a documentary. 7. JUMPER – Don't hold the movie against this book by my friend Steven Gould. It's a YA from before they called them YA, about a kid with the ability to teleport. He doesn't always use it wisely. The sequels, Reflex and Impulse, may be even better. Jumper was a fave of mine when I read it for a job I had, and then I couldn't convince the guys who had me read it to buy the movie rights! Fools. It's also the first book I bought on Amazon. 8. HARRY POTTER AND THE GOBLET OF FIRE – I stayed up late to finish this on night, and was gob-smacked by the death of a character. (I usually am—I felt the same way about Ned Stark.) 9. THE BARTIMAEOUS SEQUENCE – I think this series by Jonathan Stroud might be what sucked me into YA in a big way (along with stuff by Scott Westerfeld and the Hunger Games etc). It's about a boy who controls a demon to use his powers...or does the demon (a snarky djinni name Bartimaeous) control him? I recommend it highly. Can't believe it's not a movie yet.
0 comments 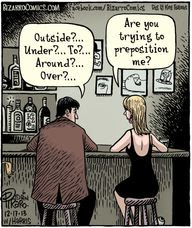 This is why I always hate picking teams. 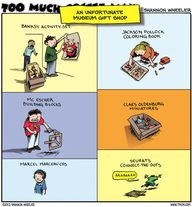 I would totally buy my nephews a Pollack coloring book.

It truly is the only reason to bother being an adult. Well, that and sex.

Lindsay says: "Wait wait wait. Is Godzilla a monkey or a dragon?"
0 comments

Jamie loved DOOM. As did we all.

Oldest gag in the book, and still... well, not that funny.

Installed no less than ten door knobs in my house in the last 24 hours. Locksmith Points: achieved!
0 comments 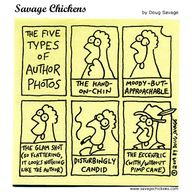 Guess which one I use.

I had a gastriac arrest for lunch. 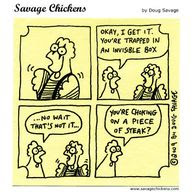